WHAT THEY'RE SAYING ABOUT ORDINARY HEROES, PETER HUM'S THIRD ALBUM: 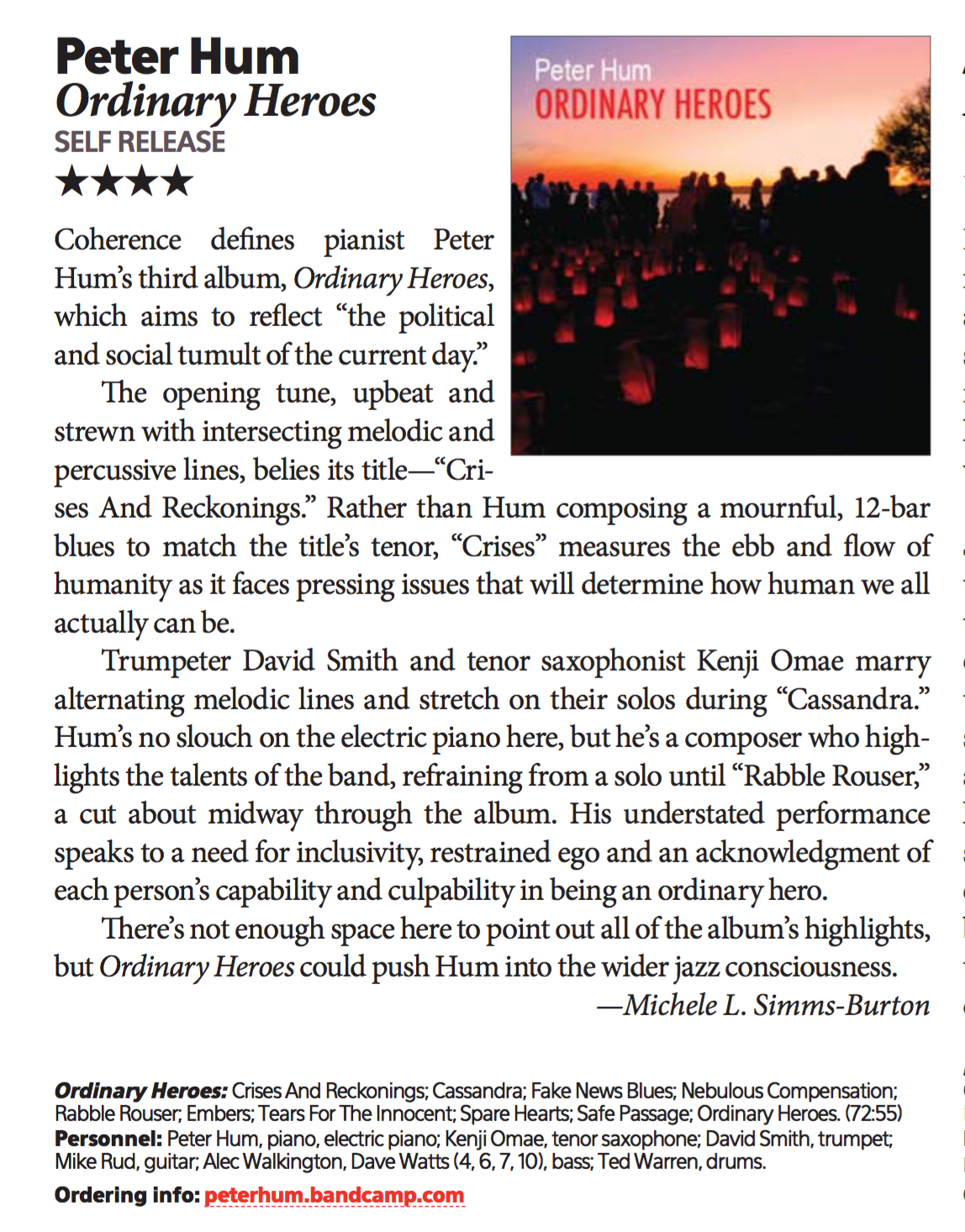 The Rex Jazz and Blues Bar interviewed Peter for its Instagram series of musician profiles during the pandemic. Check it out here.

Peter Had the honour of being featured in the TD JazzYYC Virtual International Jazz Days Festival, which involved being interviewed by Tim Tamashiro in Calgary as part of his Jazz Home Delivery series. The fantastic Toronto guitarist Reg Schwager, a Canadian jazz treasure, was also featured in the same episode, which you can watch below:

"Jazz that gets up, stands up for your rights..ten pieces that are clever and swinging in sound, with messages about social injustices refereed to in each song and title. You don’t have to watch MSNBC or Fox News to like or dislike the songs themselves, and the music is impressive... in your ears, with the message not in your face." Full review

"The first observation in listening to this album is the energy and boldness that is naturally evident in the compositions and the structure of their deliverance. Peter Hum and his sextet have created a focused and inventive set of jazz opuses...." Full review

"This is pure straight-ahead jazz at its best, proving once again that Canada remains the home of some of the best jazz musicians in the world... (A) noteworthy set of music bound to please many listeners. Peter Hum's Ordinary Heroes is no ordinary jazz album. It sparkles with amazing compositions and exemplary musicianship." Full review

"Much music that makes reference to man-made tragedies is often strident in tone and utilizes disturbing dissonances to make its point, but Hum’s music doesn’t do so. The very title of the recording, Ordinary Heroes, provides an insight into Hum’s poetics and aesthetic and it is this: principally, disquiet is viewed from a perspective apposite to the violence that causes it. He evokes this in the emotion and intellect of his pianism." Full review

(Translated from Danish) "As a listener you are sucked into something that may appear on the surface as easily accessible, melodic and modern mainstream jazz, but which contains many other, deeper and finer layers. Thus, it is in the long run very poignant, beautiful and complex music." Full review

Peter Hum was interviewed by Alan Neal on CBC's All in a Day drive-home show in Ottawa. Listen here

"Hum shows an acute awareness of how music can reflect circumstances and scenarios... But of equal if not greater importance, his music stands strong on its own... The ordinary heroes in this band have put together a solid statement from start to finish." Full review

"Ordinary Heroes is better than your ordinary mainstream jazz because Peter Hum composes, arranges and plays with the finesse and conviction he brings to his political activism."  Full review

(Translated from Russian) "Everything is very worthy here: a strong post-bop mainstream with interesting melodic and rhythmic solutions... we have a well-balanced sound and an album that should attract the attention of mainstream connoisseurs - and Trump's opponents, of course!" Full review

"Peter Hum and his fine ensemble create a world of possibilities, built on hope and the desire to make positive changes in this time of negativity... Music has more power than we think and can be used for good. "Ordinary Heroes" reminds us of the that all the way through." Full review

"Addressing the miasma of times today with his crew feeling the same way, (Hum)  manages to keep it modern and mainstream without letting things roll off the rails in imitation of the times inspiring the sounds. Whether you want to protest along or not, it's a great listening date throughout that makes you think as well as feel." Full review

"Hum's music -- 10 original compositions -- is offered... to inspire and uplift all of us in a troubled world.... The music could probably be described as solid post-bop in style, with excellent writing by Hum and fine solo work by all members... It's admirable and probably rare to fine an individual who can work successfully on both the performance and review side of the arts. Hum has the skill and the courage to accomplish this combination." Full review

"This is an excellent album which I strongly recommend for the music and strongly warn against its political motivation." Full review

WHAT THEY'RE SAYING ABOUT ALPHA MOMENT, PETER HUM's SECOND CD:

"Pianist/composer Peter Hum may be better known as a jazz and food critic for the Ottawa Citizen, but there’s nothing to suggest anything but full commitment to his art on Alpha Moment. Hum leads a sextet here, and his group concept is almost orchestral. His compositions are well formed and subtly voiced, with solos arrayed against his own lush chords, Alec Walkington’s resonant bass and drummer Ted Warren’s constant sonic shadings. While the band’s members are currently spread out geographically, the group clearly came together at a special moment for the Ottawa jazz scene, much of the excitement coming from two Ottawa-raised saxophonists who have since moved on: Kenji Omae, now resident in Seoul, may be the most exciting tenor saxophonist to emerge in Canada in recent years, a powerful, impulsive player who’s also capable of lustrous ballad playing; Nathan Cepelinski, now a New Yorker, plays alto and soprano with quicksilver thought and phrasing. Along with glassy-toned Montreal guitarist Mike Rud, the six make up a terrific band, something that’s apparent everywhere here, but most pointedly on the aptly named title tune." Full review

"Hum's piano playing is articulate and understated; his composition is fluent and vivacious. With the quality of playing from his band, it makes a very entertaining record. " Full review

"Once again, Peter Hum walks the walk with an album full of strong compositions and strong performances. Alpha Moment is the product of a serious jazz musician."  Full review

"Alpha Moment is a generous album, generous in spirit, in melodies, in solos, adult music that flows ever-forward on the strength of six fine musicians... This is joyous music worthy of your attention." Full review

"Alpha Moment is finally here, and it, like all good things, was worth waiting for... (Hum's) musical voice is... captivating, articulate, and thought-provoking." (four stars) Full review

"I think the music is wonderful. I love the shapes of your melodies, especially the title track and The Good Fight. Having the CD makes me wish I still had a show to play it on!"

WHAT THEY'RE SAYING ABOUT A BOY'S JOURNEY, PETER HUM'S FIRST CD:

A Boy's Journey ****
Peter Hum (Independent)
Pianist-composer Peter Hum's debut CD is a celebration -- a modern, forward-looking and mainly upbeat session that sparkles with positive energy. It is also a lyrical triumph, as each of the 10 songs tells a story cohesively, with Hum setting the scene on acoustic or electric piano, then providing background support for development. The CD features stellar playing by saxophonists Kenji Omae on tenor and Nathan Cepelinski on alto and soprano, with creative propulsion from established drummer Ted Warren and a big-toned floor from Montreal bassist Alec Walkington. Highlights include Take the High Road, a hope-filled tribute to Barack Obama's presidential win, New Toy and Big Lou, playful and lyrical ballads to the joys of discovery, and La tendresse s.v.p., a hymn to love. The title track is Hum's ode to his courageous father, while Unagi is funky fun for the ensemble, with Hum cutting loose on electric piano and kick-ass solos by the horn players. With such fine work, Hum can quit his day job as a Citizen journalist!
-- Irwin Block
© Copyright (c) The Montreal Gazette

A Boy's Journey "is an auspicious maiden voyage for Hum, who has crafted some fine straight ahead songs that have merit and are played with grace and passion." Full review

A Boy's Journey is an "album that holds your attention from beginning to end...a real touch of class from north of the border that you should definitely check out. (Hum's) style is subtle, elegant and joyful." Full review

"Peter Hum the musician is all about delivering the song...The end of his own journey finds him at a very good place musically." Full review

"The title track, a tribute to his father, and New Toy, a playful piece, stand out on a disc full of fine music. The closer, Three Wishes, is a delight." Full review

A Boy's Journey is "well thought out, with a strong sense of direction and purpose… filled with handsome melodies, rich harmonies, pleasing interactions, and numerous good solos." Full review

"This was a very well done and enjoyable album of mainstream jazz. Hum and company investigate many different textures and moods of music and weave together a fine album in the process... His new album has a deep narrative sense, like a prose writer linking together a set of interconnected short stories." .Full review

A Boy's Journey is "an album decades in the making, but clearly worth the wait... (it) resonates with the feel of a familiar group... With A Boy's Journey, Hum makes clear, in no uncertain terms, that he's ready." Full review

12) "A Boy's Journey is a voyage for the listener too. Hum's compositions are fresh and vital, sometimes contemplative, sometimes blessed with a joyous groove. The instrumental voices of his fine sidemen (Kenji Omae is a splendid surprise to me!) are each strongly individual, but blend with warmth and ease, too. Peter Hum's own playing is coolly lyrical in his frequent introductions, setting the stage for the unfolding of the pieces. This CD is solid and satisfying."

(To download the photos, right-click and choose "Save Image As")

For more information or to request a review copy of A Boy's Journey or Alpha Moment, e-mail Peter.